Documentary Screening at IIITB: ‘Our Metropolis’ by Gautam Sonti and Usha Rao 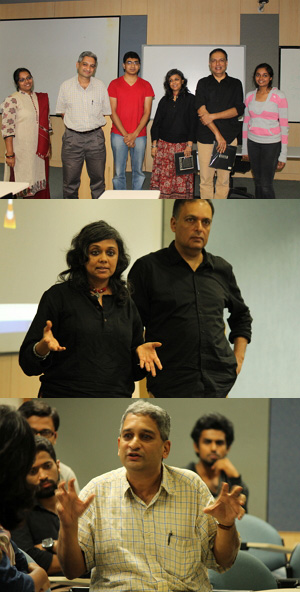 Description: Our Metropolis, a documentary directed by Gautam Sonti and Usha Rao was screened at IIITB on 23rd November 2015. It was organized by Balaji Parthasarathy and Kavitha Narayanan as a part of the course HSS 102 – The City. The screening was followed by a discussion with the directors of the film.

About the documentary:
Bangalore is being refashioned as a ‘world-class’ metropolis. Livelihoods and homes make way for flyovers, glitzy malls and a shiny Metro. Threatened with violent transformation of their city, residents confront the authorities. Beneath the State’s ideal of a ‘global’ city lurks the intent to clear a pasture for big business.

The film captures the city of Bangalore from 2008-2013, a period of dramatic transformation: the building of the Metro; mushrooming of swanky malls and gated communities; destruction of homes, livelihoods and shrinking green cover. Many felt that the State had ignored social justice, environmental concerns and basic principles of democratic governance in its haste to build a global city. Consequently this period witnessed escalated conflict between authorities and city residents.

You can watch a trailer of the documentary .